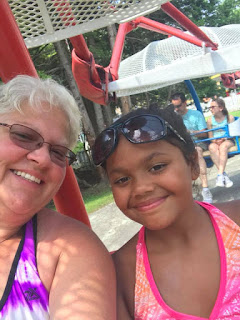 Yesterday Morning I woke up and got Michelle up a little early as well. She had indicated that she would like to get out and do something, she just wanted to get out and away for the day.

We had discussed a few options, but I got the impression she was wanting to go to Idlewild Park for the day, since it was going to be in the 90's and sitting at home really wasn't an option on such a fine day. I found a great deal that they were offering, 4 tickets for $24.50 each, or pay the $41.99 per ticket that was their normal asking price. With such a good deal we bought 4 tickets and asked if Trish and Layla wanted to go. Trish is sick, but she said Layla would love to go so we went and picked her up and spoiled the little girl for the day.

They did build a newer set of slides that are active and they installed a lazy river which was one of Michelle's favorites. The Wowabunga Wave Pool is always a treat, it kicked our butts all day long as there are no wave pools anywhere close to here that compete with this one. Then waves are big and powerful and will give you a fun workout.

It was a great day other than my sunburn...lol
Posted by George Hall at 11:22 PM