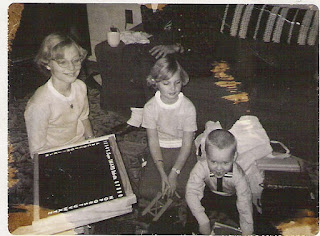 This weeks pic is from I honestly don't know when. I think this picture was taken at the old house at the end of Van Voorhis and my guess is it's probably the 1968 or 1969, but that is just a hunch. There is me in the front and Lynne and Sharon behind me and no idea who the older gentleman sitting behind us is unless it was their Dad Ralph, but that is just a guess that I'm not very confident in making. The hands look older but Grandpa Hall never sat on the couch, he had his chair that he sat in.

I was such a cutie though, not that I'm conceded or anything.