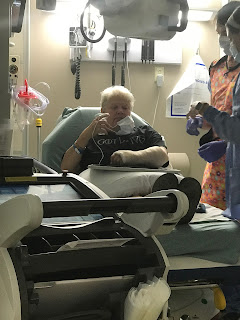 Well all of those fun filled times that we had this weekend are now completed, it is time to take our collective noses and stick them back onto the grindstone for another fun filled week of doing what we do for a living.

After grocery shopping yesterday Michelle went down to visit her Sister at their store in Osage that they are liquidating. She has a little mishap with a doorknob and the next thing you know she is on the ground with a broken wrist. Chris called me as I was at home doing finances and she ran Michelle to Ruby and the ER.

Turns out Michelle broke her Radius bone in her left wrist, her Ulna came through uninjured, but x-rays showed the radius was out if place and had to be re-set. Fortunately it was broken and dislocated, but it was not as bad as the Nurses initially believed as her wrist was displaced.

The Doctor twisted and reset it and put some kind of a soft cast on it. She needs to follow up Wednesday and see if she will require surgery, the re-set seemed to go good, but we'll have to wait until Wednesday to get the final verdict on surgery.

Other than spending half the day at the ER with Michelle, it was a normal day considering.

Have yourselves a great day today.
Posted by George Hall at 4:00 AM