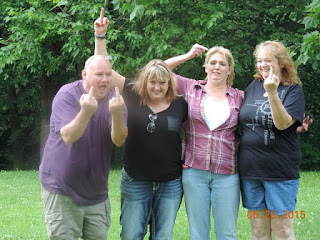 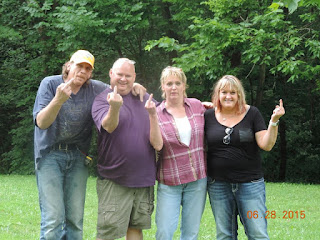 This weeks pic goes back to the 2015 Picnic that we had at Krepps Park. It had to be in two parts, the first one Pam was there but Gary was late showing up, the second one was after Pam had left and Gary finally showed up to the Picnic a little late, hence why we had the 5 Morgantown based siblings all at the same place, but not at the same time.

Notice that everyone is giving the Hall Salute, where everyone likes to flip me off for some reason. I actually did a video of that years ago to the I-95 Asshole Song that actually got a little world wide attention as a few places around the world hosted the video.

Hope everyone has a great day.
Posted by George Hall at 3:00 AM