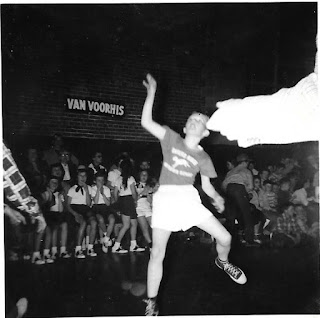 This weeks pic goes way back, back to a time even before I was a twinkle in this players eye, this is a picture of my Dad playing grade school Basketball. I always thought that he went to the Van Voorhis School but his shirt says Bakers Ridge.

I'm guessing that this picture was taken sometime in the later 1950's. My guess would be about  1957 or 1958 or so. He was 17 when I was born and I know Jr High started in 7th grade, so using a little deductive reasoning that is the time frame of the year that I think that this picture was taken. Need a time reference, Hot Rod Hundley would have been WVU's star player or Jerry West would have been playing his first year of Varsity Basketball at WVU.

Have yourselves a great day.
Posted by George Hall at 4:00 AM