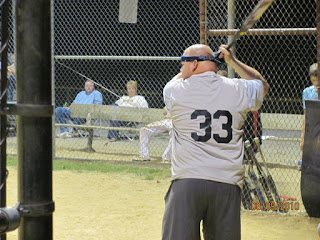 As we are finalizing this years rosters for the 2018 Softball Season, I go back to the last season I played the regular leagues, back to the year before Michelle and I got married and we were sponsored by MiHaley's. It was the summer of 2010 when this picture was taken. It's one of me batting, which to be honest with you may have been my final at bat before I retired until 2016.

I got married the next year, so we were busy with the Wedding plus this team had all pretty much went their separate ways. We had lost our sponsor and Chris just didn't want the headache of coaching anymore. Brian and I ran the Recourse teams and I remembered all of the headache's associated with doing that, plus I had a full sponsorship with Recourse so money was never an issue. We always had enough to cover entry fees, uniforms and usually enough to play the early bird tournament as well.

I'm playing the Senior league once again this year and told Smitty I would fill in during emergencies for the A team.

We will once again be sponsored by Whitetail Crossing, thank you once again Ron and Sarabeth Blosser for your continued sponsorship.