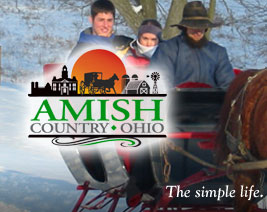 Here I sit on a quiet Saturday Morning, I'm the first one to recover from the butt kicking I took from that dreaded Sandman last night and I'm up watching Sara Silverman on doing stand up on HBO and collecting my thoughts for the day.

It's going to be a road trip kind of day for us. We're going to leave early this morning and head out to Amish Country in Ohio, we would like to be at Breitenbachs by the time they open at 9:00 or just a little after. It's a little less than a three hour trip from here, so we'll be leaving here somewhere around 6:00. Michelle wants to hit Tis the Season and I want to hit a place we have never went to with Guggisberg where my favorite cheese (Baby Swiss) originates. Every time we head to the region we like to try at least one new place, that way the more we go there the better understanding we have of the area.

Update on Yesterday's MoHawk Bowl, The Mighty Mohigans spotted cross town rival University High a 21-7 Halftime lead before scoring the first 34 second half points to bring home a 41-28 MoHawk Bowl victory to claim the city's bragging rate for yet another year.

Looking for a little College Football, the 10th ranked WVU Mountaineers are in Stillwater Oklahoma this afternoon to take on the Oklahoma State Cowboys with a noon kickoff time. I'll get my updates from Ohio on my phone, this will not be the first time I have done this. As Michelle shops tis the season, I usually sit outside and get game updates.

Have yourselves a great day.
Posted by George Hall at 3:11 AM