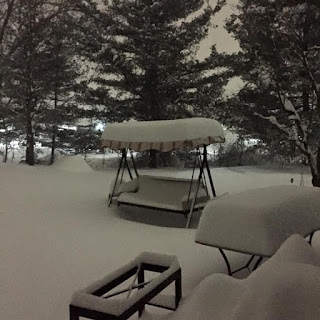 Well here I sit, snowed in to say the least, Michelle and I are both up and walking around looking at the snowfall that has hit us last night and not making any real plans for the day.

Looks like we have got about 12-13" here 12"on Pearl alone and I have seen people posting posting pictures on Facebook of anywhere between 14"-16" around Morgantown in some other places. It doesn't look like it is going to subside for another 12 hours or so. We're prepared and as far as I know everyone is safe at home. 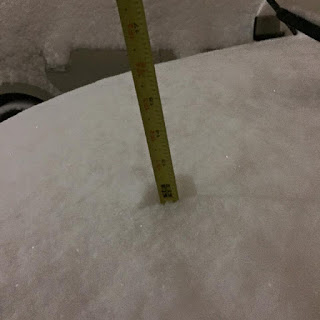 Fortunately most people didn't go running round last night as the roads around Morgantown still look to be pretty much untreated at 4:30 AM. I have to say from the 511 cameras and the fact that most people stayed in, I'm surprised nothing was really done but it is still snowing so that's hard to tell and it would be a wasted effort.

We have no plans for the day other than sitting at home and maybe making the weeks menu before we try to venture out tomorrow to go grocery shopping. It's calling for snow up until early evening, so stay in and stay safe.

I do have my entire Winter 2016 Album on Facebook for all to enjoy.

Have yourselves a great day, find something good on Netflix and relax for the day, you're not going anywhere.
Posted by George Hall at 4:48 AM