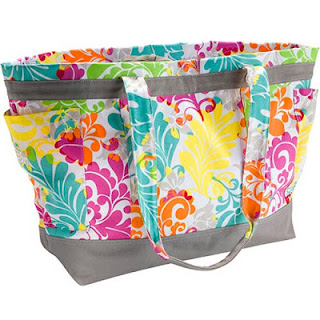 Here I sit once again in a quiet household, I'm the only one here who has recovered from a losing battle with the sandman. I'm up early and watching Mallrats (love Kevin Smith movies) in the background as I surf the World Wide Web and collecting my thoughts to write this very blog.

Michelle went to Amy's Thirtyone party  yesterday and helped her out a bit. She ended up buying four things including this bag ton the left that we are going to use on the beach on our cruise, She's going to have our name embroidered on it and this is going to be our beach bag for days we arrive at ports.  If you didn't get time to order, I guess that show is now closed so you are SOL. Michelle said she got a good turnout and people were buying a lot of stuff, giving Amy quite a few things to choose as gifts. I'm glad it turned out pretty good for her.

I did hear from my sister Pam a couple of nights ago, she said she was in another fender bender on my voice-mail as she called after I was already in la-la land (I go to bed early). I'll try touching base with her this weekend and see how she feels.

We gave Chad his birthday Present a little early yesterday, he smashed his phone and AT&T was giving a $100 trade in on all working older smart phones. I had a 3GS that stayed in an otter box from the beginning and was in pristine condition so we traded that in on a new iPhone 5 for him. I got him another otter box for that phone so he is set and good to go again. I think he was amazed with the connection speed capabilities of the 5 since it is 4G LTE enabled where the iPhone 4 was not. He said he sent a picture to his cousin Jon and it was lightning quick. He has an iPad but he mostly uses that here or tethers a connection on his iPhone. We switched over to the family share plan earlier this year allowing all of us to create a personal hot spot. I can think of a few times in the past few years where I considered surrendering my unlimited data plan for a tethering plan, the shared plan allows us to do this and we have plenty of data to share.

I talked to my brother Gary briefly. I gave him my old computer because he quite frankly needed one since he is going out on his own for contracting and really needed something with a little bit of power and was reliable. He hasn't had much time to work on it as he has been busy.

Michelle said my sister Terri is looking real good. Terri said she was a little sore from her surgery still, but is able to get around and still be functional at work. She is a real trooper and like my sister Pam, I think they will both go to work even after they are dead. Hard workers to say the very least.

Not sure what we are getting into today if anything, I'm holding off planting until next week and it's supposed to rain all day.

Hope you have a great day.
Posted by George Hall at 5:25 AM