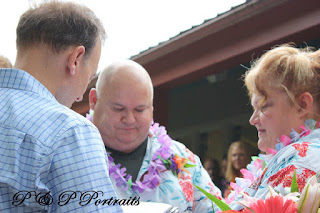 This weeks Photo Flashback has some very special meaning to it, it is one of if not the most significant day in my life. It was on this day nine years ago that my lifelong bachelorhood had came to an end and Michelle and I tied the bounds of matrimony in our own special way.

We were married by a co-worker of Michelle's and went and became ordained just for the purpose of marrying us, it was on his bucket list of things to do. We were not his first marriage, that honor went to another co-workers family as someone was getting deployed and they wanted to get married before he left. We're not even his last wedding as he performed one a couple of weeks ago to another one of Michelle's former co-workers.

To my wonderful wife I say Happy Ninth Anniversary, next year will be our tenth and we are planning on seeing Reba in concert on that day. My wonderful wife has stuck by me through thick and thin, good times and bad times and has always been my soulmate this whole time. I consider myself very lucky that our paths once again crossed, only this time the timing was right.

Happy Anniversary Michelle, I Love You from the bottom of my heart.
Posted by George Hall at 4:00 AM