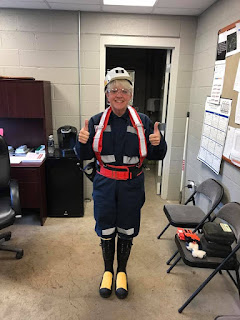 It was just a few short weeks ago that Michelle's time at MEPCO had come to an end. They closed down their last coal mine and capped everything off earlier this year, and she was retained until May 4th which ended up being her last day working for MEPCO.

Zoom ahead to yesterday, she was contacted by the former HR Director at MEPCO who was now the HR Manager of the Fairmont Office for Elite Coal Services in Fairmont. They just recently opened up the Fairmont Location and he called her to come in for an interview yesterday. She left the interview feeling pretty good about it.

I would like to congratulate Michelle as she has been officially offered Michelle the position of Office Manager beginning June 18th and she has formally accepted the offer.