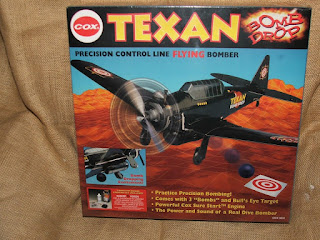 Here I sit on a quiet Sunday Morning, the TV is even silent behind me and the only sounds I hear are the sounds of the fans running in the bedroom and the echo of my keyboard with each keystroke as I still my thoughts on the net.

Well earlier this week I said I was participating in an Ebay Auction of a toy from my youth (I didn't have this particular one). I saw a Cox Airplane that was still new in the box and I just had a feeling this would go for a couple of hundred dollars so I played around to see if I could get it cheaper. I did have a couple of challengers, but I increased the bid significant each time they challenged me and did so that I outbid them within a dollar each time. Lucky guesses of people who put higher bids in in anticipation of someone bidding against them. I ended up winning the auction yesterday and I was really happy about it.

When I was a kid, Cox planes were the big thing. I always got to watch people fly them at the Church, but never got the chance to fly one myself and I always wanted one. One Christmas my Dad actually bought me one, imagine my excitement of a toy that I had watched so many others play with was now mine. I got it at Christmas time one year, and was one of my all time favorite gifts. Of course I had to wait for my dad to fly it with me as it has an internal combustion engine that powers it. They made tether cars as well that some of them reached speeds of 200 MPH before they started on airplanes.

Well long story short spring finally arrived and I was excited that I was going to finally be handed the handles of this toy that actually flies. This was toward the end of when they were flown with a line and before they went to the radio controlled, if I want radio controlled I have a kickass drone my wonderful wife bought me for Christmas time, but this was the type of plane that first attracted me to them. My Dad lived in a trailer court at the time (mid 1970's when a lot of people lived in mobile homes) and he was going to fly the first flight with it. He did, he flew it for a couple of minutes and it would be my turn once it ran out of gas, only problem was he ended up ended up smashing it into the trailer next door. Smash kaboom, put it in the trash type of crash. I never had the opportunity to fly one. Now I own another one and I'm so excited.

Didn't end up making it out for RTI yesterday, there was a technical snafu where the cases are in the system and set to transfer to me, but have never been transferred. It was a little frustrating trying to get the cases and I never did manage to download them yesterday. I did finally get my cases this morning, so I may try it this afternoon.

NCAA Basketball you say, oh yeah tonight at 9:40 WVU and Marshall will play in San Diego for a chance to move on to the Sweet 16 and play Villanova.