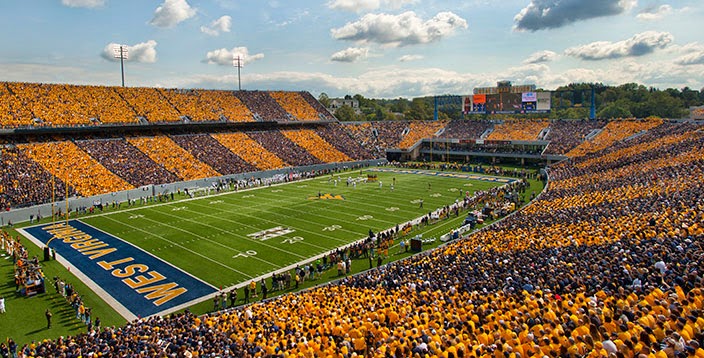 Here I sit once again in a quiet household, I'm the first one to recover from that losing battle with that dreaded Sandman last night and I'm up early collecting my thoughts for the day and surfing the Net. Man of Steel is playing in the background on HBO, but I'm not really watching it.

You wanting some football? West Virginia University plays host to #4 ranked Oklahoma Sooners this evening at 7:30. I'll be watching the game from here to avoid the mayhem that will be all around Morgantown this evening. Traffic was bad yesterday as many of those attending the game arrived in town. Hopefully we can give the #4 ranked Sooners a good game as we stripe the stadium.

I'm almost back down to my pre-vacation weight, within a pound now. I packed on a few (about 10 lbs cause the ice cream machine kept calling my name) on the cruise ship as I simply enjoyed myself for the week. I haven't lost it all back yet, but I'm almost within a pound and hopefully will be earning my 75 pound badge from Loseit.com in the very near future.

With all that weight loss, my extremities have went from always being warm to absolute ice cubes over the past few months. I was at the point where I was about ready to buy a pair of gloves to sleep in my hands and feet were always so cold. Well we solved that problem yesterday when we bought a king sized electric blanket for the bed. I set this thing on the highest setting when I went to bed last night and it was nice and warm and toasty. In the middle of the night I had to turn it to the lowest setting as it was too hot. It has the dual controls so each of us can control how we like our comfort level. Well worth it, I wanted to get one last winter but they were sold out. Now I have one for this winter and this thing is awesome.

We also had two atomic clocks here, neither one of them as of yesterday were working any longer. One just never worked right and the other went on the fritz yesterday morning after working from the time we moved here. So we bought a new one to replace the two that were no longer working. It's my primary timekeeping time piece at home (other than my phone) and I felt lost without it.

Have a great day, be careful driving around town and Let's Goooooo Mountaineers!
Posted by George Hall at 3:53 AM