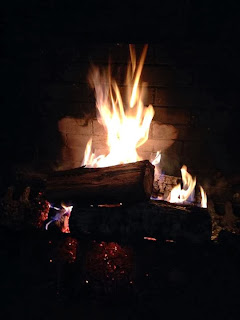 Here I sit on a quiet Sunday Morning, a morning where all is peaceful and and the house is silent other than a few fans spinning in a relaxing harmony in the bedroom. I've got American Reunion on the TV behind me and I'm just up collecting my thoughts on this early Sunday Morning. I've recovered from that butt kicking I took from that dreaded Sandman yesterday evening.

It was a bit chilly yesterday morning, son as you can see I had the fireplace set up and ready to go so we started and maintained a fire in the fireplace the whole day. I managed to let it go out over the night, but it is also nearly 60° outside so it's not that big of a deal. It was nice and warm and toasty in here yesterday.

Yesterday was a bit of a tragic day in Football for me. First off the Mountaineers lost to a Conference foe that has not won a league game since 2010 and 2009 based on the current league lineup. It wasn't a close game, we pretty much were beaten handily by Kansas 31-19  after falling behind 31-7 late in the 4th quarter. This OFFICIALLY ends the Mountaineers hope at a post season bowl and puts our record at 4-7 with one game to go in the season. I thought yesterday's and the next game were both cake walks, I guess I was wrong. I said 5-7 at the start of the season, if they beat Iowa State (who knows if they will) they will reach that 5-7 mark.

In High School Action University beat Morgantown 9-3 for their second win this season against the Mohigans. Morgantown could not get Chazzy Thomas healthy enough as he only managed 6 yards on 3 early carries. I really thought the Mohigans were the best team in the state this season, but alas it was not to be. Congratulations University High.

It was not a very good sports day for me to say the least. Hopefully today will turn out a little better for me. Have a great day.
Posted by George Hall at 6:28 AM