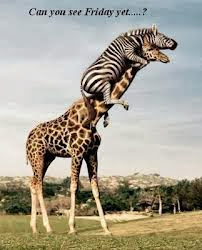 You may need a little help with this, but if you get up on your tippy toes, high enough to see over than noontime hump and just on the other side of a photo flashback, you can see the dawn of yet another weekend off in the distance.

There has been many rumors going around the past few weeks about Oliver Luck being the front runner for the University of Texas's Athletic Director job. He interviewed last weekend and an announcement was believed to be coming this week. It did, Steve Patterson has accepted the position leaving Oliver Luck at WVU. I personally don't care too strongly for Luck,. he's done some nice things and he has made some mistakes. I personally don't seem to trust or care for him or the job he has done with the notable exception of everything he has done for the baseball team.

Well I got an early birthday present from my wonderful wife yesterday. Ask and you shall receive, I am now a member of AARP, but the full membership doesn't kick in until December, but it is something that I have actually wanted. Plenty of discounts, benefits and other perks.

I'm off to see if I can find those blue footed booby's that have been singing and dancing around my living room.