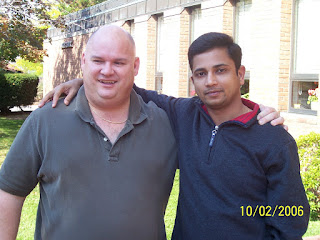 This weeks picture goes back nearly 13 years, back to a time when I worked for VARGIS who later became Infotech who is now Cyient. I was the ArcGIS guy at this facility in Frostburg and my Aerial Triangulation guy was a man named Anand whom I remained friends with for years after leaving Infotech. He was from Hyderbad India and was in the US when his house was being constructed.

I have had a handful of WOW moments as a professional, when I seen a new technology that was coming out that was going to revolutionize the industry. One of those was Google Earth. I was working in Frostburg when it was released and in a Photogrammatry lab no less, what guys line Anand and is make features for Google Earth. I'm more the planimetric information (points, lines, Polygons) and Anand was the imagery, so we were both portions of what made up much of Western Maryland's information in Google Earth.

I remember him being amazed and seeing his home being constructed for the first time that was in India, from Frostburg using this new technology that we know as Google Earth.

I last spoke with Anand a few years ago, he was trying to get into the US permanently to work. Great guy, very skilled and we worked very well together.