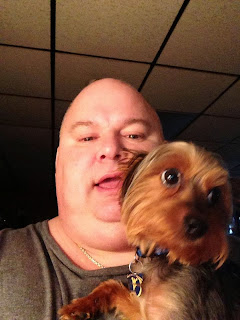 Here I sit in a quiet household, I'm the first to recover from that losing battle with that dreaded Sandman last night. I'm up early watching Identity Thief on HBO and collecting my thoughts for the day.

Had a huge scare yesterday morning when I was heading out for work. My little buddy Rocky (pictured here) had met me at the back door for treats with his sister Lilly as he does every morning and evening. As I was leaving for work he met me again at the front door (he is very affectionate and loving).

After I pet him again, he takes off around the house and I head to my car. Next thing I know he takes off straight towards the paperboy walking  down the road. I immediately start to call to him but to no avail, he runs right across the road and starts barking at the paperboy.

After a few barks and me calling for him the excitement is over with and he decides to return back home. We line on a very busy blind turn and not one but two cars were coming as he was trying to return back across the street.

He managed to dodge the first car coming down the hill as the two cars slowed to avoid him, the second car had almost passed and I heard that heart dropping yelp as the second cars rear tires managed to clip him. I doubt the second car even knew he hit him since he is such a small and petites dog.

Rocky was VERY lucky and must have the nine lives of a cat. He does have a broken pelvis, some road rash and can only stand on one back leg. Diagnosis, he will make a full recovery, he just needs a lot of rest and about six weeks to recover.

Last night this poor paperboy (an adult) had went to woofs and bought rocky some treats (I buy him treats in bulk) and stopped by the check on him.

Rocky is back home, well on the road to recovery expected to make a full recovery, but it was a scare. That was my little buddy. All I had to do was sit down and extend my legs and he would immediately jump up and lay down on my upper chest.

I'm thankful that my little buddy will fully recover and it was not any worse than it was.

Have a great day.
Posted by George Hall at 5:07 AM

Email ThisBlogThis!Share to TwitterShare to FacebookShare to Pinterest
Labels: Rocky