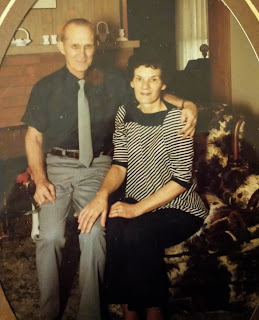 Once a week I like to take a little bit of time out and look through all the pictures that I have either taken, stolen, or been given and that I have stored on my local computer and my external hard drive that I use. Little lost moments in time that were forever captured and in some times later shared with others. Sometimes this is an easy process and sometimes it's not so easy, it is however always a whole lot of fun.

This weeks picture comes courtesy of my Moundsville family. Renee Wolfe sent me this picture earlier this week and as soon as she sent it I knew right there and then that that was this weeks photo flashback.

The people you see in the picture are both now long deceased, but not forgotten. The man on the right was my Uncle Chuck and the woman on the right was my Dad's oldest sister Juanita or Booky (Boo Key) as I used to refer to her. This picture was taken from their home on First Street in Moundsville, and to be honest with you I can't put a date on it. My best guess would be sometime in the early 80's if not late 70's.

Juanita was the first one to introduce me to probably my one vice in life, soda pop, when I was a young kid. She would always drink a glass of soda (just one) every night. She was the one who turned me on to the carbonated sugary (I drink Sugar free diet now) addiction that I still have today.

I miss them both dearly, and even took my wife Michelle to Moundsville a couple of months ago and showed her what I think was their house.

I would like to return there this spring to tour the Prison  and maybe even eat a little (or a lot) of DiCarlos Pizza if anyone might be interested in going.