Well here I am again, up before everyone else except Chad who just went to the Fridge and one of the cats who is here behind me. I'm watching the movie Volcano with Tommy Lee Jones and collecting my thoughts for the day.

Well my eye appointment yesterday went as expected, I am going to have a second cataract surgery later this month on the other eye. I had my first surgery a little over three years ago and now the other eye is starting get worse, although it is no where near as bad as the other one when we figured that one one. I go in next week for the pre-op physical and surgery the last day of the month. Funny little story they were checking my left eye and I swore that the lens was dirty, there was no lens in it. I think I first noticed my eye was going bad at Steelers Trivia in the studio. Easiest surgery one could ever have and I have a great Doctor. Here's a pic of me with my eyes dilated. 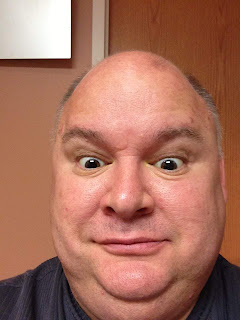 Today Morgantown High School Class of 1982 will be having our 31st class reunion. Since last years was so successful, we decided to do it again this year. Simple pic nic at Coopers Rock. Hopefully the weather holds up. I talked to Smitty and he said we're expecting around 40 people. Not as big as last year, but still a nice little turnout.

I think Chad is going to start working with my brother Gary for  awhile, Gary needs the help and Chad is getting ready to move to Fairmont (going to Fairmont State this Semester) and they need some extra money to get their apartment set up. They found a nice townhouse, but we have not seen it as of yet.

Have a great day.
Posted by George Hall at 5:52 AM