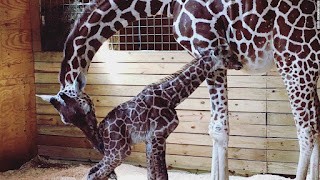 Here I sit in a quiet household once again, I'm not sure where my co-author is this morning so I am out here flying solo once again. I'm up watching some movie on HBO that I'm not sure of the name of and collecting my thoughts for the day.

It is with a heavy heart that I have to report that April, the worlds most famous Giraffe has died. She was euthanized yesterday at the recommendation of her veterinarians due to her worsening arthritis. This is a Giraffe that I would put youtube on the bedroom TV on for Michelle to lay there and be able to watch all night long a few years ago when he was first pregnant and has watched her and Animal Adventure Parks cam on pretty much a daily basis ever since. My Mom is also a big April fan and called yesterday to see if we had heard the news, but we already had. Michelle and Mom are always on the Cam and spend many hours watching these majestic animals during their pregnancies.

Michelle and I got our second COVID Vaccine yesterday, and Hayley and Tyler both came down and they now have their first vaccines. Once again a big thank you to my niece Brittany for assisting with helping us get scheduled when it first opened up. I really have no symptoms or side effects, Michelle not so much as she has a headache and a stomach ache and he arm got immediately sore. With so many people now vaccinated or in the process of being vaccinated hopefully we can start putting this year long battle with COVID behind us all.

We had to put Ice in the garage earlier this week, it was starting to rattle a little when we were doing 70 MPH on the interstate and bore to the left. I took it to Brian and Hartsell's Exxon and he determined it was the right control arm that needed to be replaced so we had him replace it.

We'll be doing our grocery shopping this morning being that tomorrow is Easter. We'll get everything out of the way today and start preparing tomorrow's dinner early tomorrow morning. What will be having for Easter? We're going to smoke some pork ribs in the smoker and start our 2021 smoking season.

Some good news from the week, my new Drone Battery arrived and that seems to have fixed all the problems with the drone going into the creek a couple weeks ago so far. The other Battery I think had some real problems that were causing other issues with the drone that don't appear to be happening with the new battery. I won't know for absolute sure until I have a chance to put it up in the air.