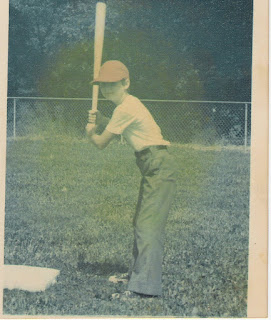 This weeks pic goes back to I think 1974, it was my second year playing Little League and the first time I was not coached by my Dad. I was the superstar Second Baseman for Citizens Savings and Loans. Would you believe I pulled off an unassisted Triple Play this year. Triple plays are rare, but when they are unassisted it is more rare and yours truley had one during that season.

Time does go by too quickly, as it seems like that was just yesterday. Baseball is not a sport I watch a whole lot, but it is the sport I have played more than any other in my life, especially when you take Softball into consideration.

Have yourselves a great day.
Posted by George Hall at 4:00 AM