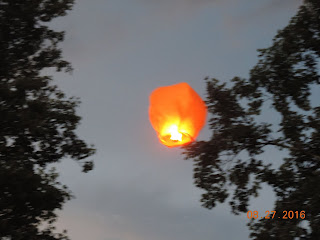 This weeks pic is also a plug, it's from the light up night for the Johnny Koon Pediatric Brain Tumor Research. This was from three years ago and I grabbed a shot of a lantern going up in the air. Last year they raised $5,565.00 for the cause. He is getting a wing named after him at the new Children's Hospital.

So why this pic, why this topic? Because it is coming up in the near future. I'm hearing rumors of August 24th, but that can't be confirmed yet until an official announcement is made. So start saving your pennies and I have to figure out a way to beat my niece Amy who somehow manages to win every door prize every year (I have never won a single prize in any year) and beat her strategy to win something. I thought we were going to do it last year, but she still managed to basically win everything. My goal this year is to beat her in something, I don't care what it is, just something so I can trash talk to her. =)

Have yourselves a great day