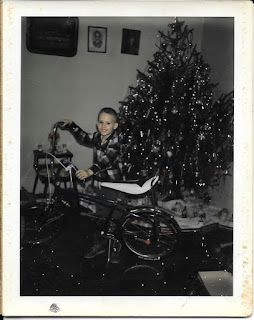 This weeks picture is very special to me, it goes back to either 1971 or 1972 at Christmas time. You always remember your first bike and this was mine. I used to love this bike and it was one that was popular before 10 speeds became the fad, it was a 1 speed bike with a big banana seat. You would stop it not by the hand brake which are so prevalent in today's bicycles, but by pedaling backwards about 1/8th of a rotation it would lock the back wheel up to allow you to skid and have fun.

I remember that I had so much fun, they had to buy me a new rear wheel in a very short period of time and I remember it being a blue wheel that made blue skid marks.

Every child has that memory of their first bike ride, this was the day that I had mine. My dad pushed me from behind a couple of feet and then let go, it was when I looked back to see if he was still there was when I had my first bike wreck too.

I have many fond memories of riding this bike, specifically with my cousin Lynn at my Grandmothers. We would ride our bikes for hours on end in the church parking lot.

This bike lasted a few years before it was replaced by a new 10 speed bike, but I always kept it around and rode it at times as you couldn't really do wheelies on a 10 speed. This bike was much better to do tricks on, like getting it going real fast so I could just off and see how far it would go on its own, I called it the Ghostman Bike. My 10 speed was for riding, this one however was for for.