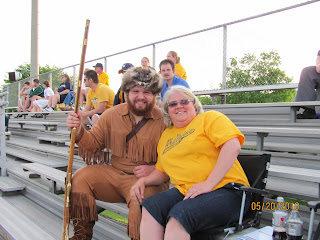 This weeks pic goes back to 2010, Michelle and I had went to a WVU baseball game in the spring of 2010 and this old time looking dude stopped by and talked to us. I don't know how they let him into the game with a musket, but they even let him fire it a few times that day.

I had actually known him for a couple of years before this point, he went to church with a boss of mine plus he was a regular poster on Blue and Gold News, so I knew his back story before he was ever named the Mountaineer. I believe this baseball game was his first official outing as the primary Mountaineer as he won it during basketball season. Up until that point, I had never seen the Mountaineer at a Baseball game. Brock started a trend.