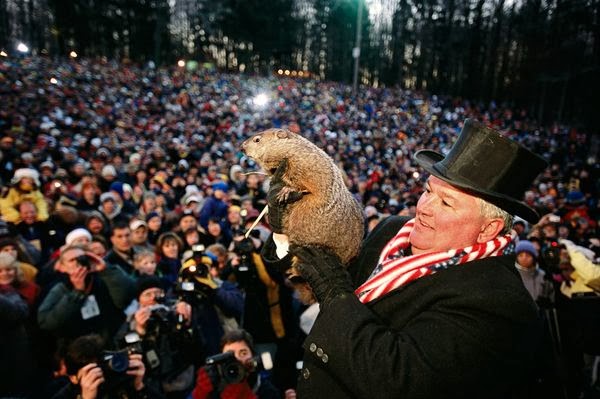 It's Phil's Day. The one day of the year where we pay attention to a Rodent in Punxutawney PA as he displays his meteorology skills and predicts what the weather is going to be for the next six weeks.

Last year I bribed Phil and he told everyone that Spring was right around the corner, but that must have infuriated Mother Nature as it was a strange year for Winter.

This year we are experiencing the coldest winter and most snowfall that we have seen in a number of years. Mother Nature must still be mad at us for bribing Phil last year and trying to fix his prediction.

There are 20,000 people on Gobblers Knob and waiting on Phil at 7:26 AM this morning. I have a feeling he is going to see his shadow.

Neat little fact, did you know in the 100+ years of his weather forecasting that there has only been one Phil? Yes, He drinks a magic elixir which allows him to live one more year. They must have pumped it into him after he committed suicide earlier this week, because Phil is predicting today.

My prediction, continued Winter, let's see what the king of all Groundhogs says.

Email ThisBlogThis!Share to TwitterShare to FacebookShare to Pinterest
Labels: Groundhog