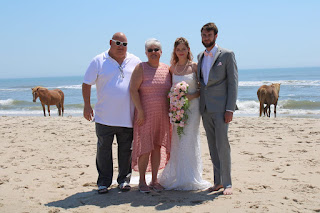 Goals were set, a plan was put into place and all went off without a hitch. Hayley officially became Mrs. Tyler Ash this weekend and everything went very well. Her and Tyler are officially wed and they are officially on west coast, Sand Diego, for their honeymoon. 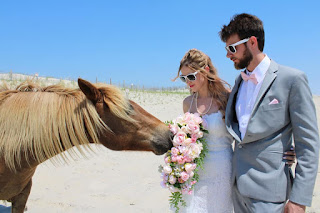 There was a special surprise that no one could have predicted or planned for. We held the wedding on Assateague Island, an island where wild ponies reside. This is their natural habitat and they do live there. As Hayley and I crossed the sand dune and looked to the ocean, there were 8 or 9 ponies just lined up by the ocean. They didn't move and just stood there until the ceremony was over. That's when a few of them decided they wanted to be a part of the party and broke their formation and almost as if it were on que, came and greeted everyone in a very friendly manner. One of the locals said it was a perfect day, as the ponies have not been on this beach for a couple of months but showed up on Hayley's wedding day. This was unexpected and just made her day. 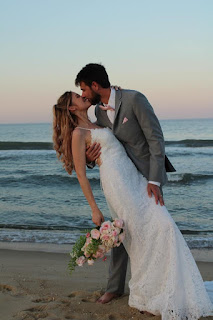 I carried her Dad's remains in one arm and her in the other as Michelle and I gave her away to become Tyler's bride. I think it is one of the most honored that I have ever been in my life, that she allowed me to not only be a part of it, but in such an important role that I was honored to do. I am proud to call this young woman my daughter, oh and today also happens to be her Birthday. Reach out to her and wish this beautiful young lady a very happy birthday.
I want to thank any and all who were involved in this weekend, everything came together like clockwork and gave Hayley a very memorable wedding.
Posted by George Hall at 2:00 AM