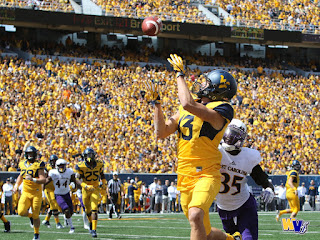 Here I sit in a quiet household once again, there is nothing on on the Boob Tube and I have my headphones on listening to some Don Williams Music who just recently passed away and collecting my thoughts for the day.

The Mountaineers bounced back from last weeks opening loss to beat East Carolina 56-20 yesterday here in Morgantown. WVU was up 49-3 at the half, son the score ended up being closer than the actual game so to speak. QB Will Grier threw for 5 TD's and former recruited QB David Sills (who was signed by USC when he was 13 years old to play QB) caught 7 passes for 153 yard and 3 of those touchdowns. RB Justin Crawford had another 100 yard effort as the Mountaineers looked very good yesterday.

Today is the day that we would have left on our Cruise, but obviously all those plans have changed as we canceled a couple of months ago and the Cruise itself had been changed due to Hurricane's Irma is about to hit landfall in Florida at a Cat 4 (downgraded from a Cat 5) and Jose, another Cat 4 is coming up right behind her and it would have been right in the cruises path of travel. Carnival has changed their itinerary and they are going to Halifax Nova Scotia and St. John even further north of that. If we had to cancel a year, this was probably the best year to do so as we will return to our normal cruising schedule next year!!!

Today will be filled with shopping, laundry and watching the Pittsburgh Steelers as their NFL season begins this afternoon.

Have yourselves a great day.
Posted by George Hall at 4:26 AM