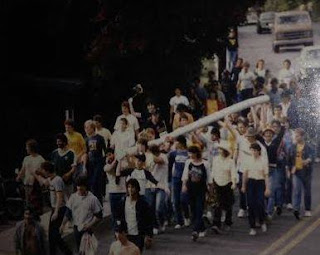 When Colasantes caught fire a couple of years ago, the first thing that ran through my mind was all the memorabilia that was on the walls and what may have been lost. For years I heard there was an image in the women's restroom that someone told me that I was in. This image is after the 1984 Penn State Victory, the goal posts were torn down and carried from the stadium to the old stadium loop in Sunnyside. This is a picture of that goal post in transit to the Stadium loop and I am NOT in this picture.

Sad story, I was completely drunk for that game, I was so far gone that I was in the sink puking at Mountaineer Field the majority of the game to be literally honest with everyone. I had two room mates at the time, one was a Penn State Graduate who was doing his Masters here at WVU named, Michael Jordan. He was about 5'8" and white, but his name was Michael Jordan. My other room mate was Greg Cutrone who was a member of that 1984 team that ended the streak. Our house was interesting that week and Greg and I made a banner to remind Mike who the Beats of the East was...lol

I saw this picture pop up on Facebook this week and knew that I had to make it my photo flashback even though I am not in this one, I met the goalpost not too far beyond this point and helped carry it into the stadium loop (yes I was still very drunk).