It's Gameday in Morgantown 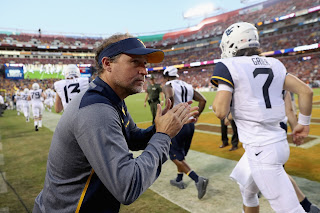 It's finally here, yes it started last week with the 2017 Home Football Season. The Season started last Sunday with a 24-31 loss to heated Rival Virginia Tech as they retained the Black Diamond Trophy, bu the home season starts today.

I'm sure that even in these wee early hours in the morning, even before they open the lots up to tailgating, that there are people wandering around town with the "I Need Tickets" signs, even though they already have a stack of them in hand lol.

Today the Mountaineers take on East Carolina whom both teams are 0-1 on the season after ECU lost last week to Jeanettas Alma Mater James Madison University. Don't ever discount them though, you never know what ECU has have been known to give us a lot of trouble in the past, but I think we will be fine.

The game kicks off at noon here in Morgantown and I'm sure the Mountaineers will be playing in front of a full stadium as fans want their first home glimpse at new QB Will Grier who will most likely be a next level QB as he is the former Gatorade National Player of the Year and former starting QB at the University of Florida.

Should be a good game, I'll be watching it from my living room with the surround sound, and shorter bathroom lines than there would be at the stadium.

Let's Go Mountaineers.
Posted by George Hall at 4:33 AM