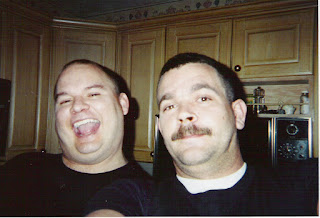 This gem is from Christmas 1998, my Dad's last Christmas. It's a picture of me and my Brother in Law George in my Dad's kitchen. That was the year we decided we were having Christmas Eve at my Dad's whether he wanted to have it or not. He was pretty much dead set against it up until Christmas Eve Day. He had planned on working that night and didn't want no part of it, but he eventually changed his mind and was all in to make this happen. Good thing he did because that was his last one.

I think we invented the selfie long before the iPhones were even thought of. The again my Dad used to turn the camera around and take pictures of himself long before this picture was taken.