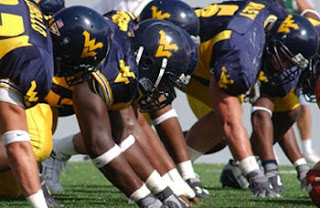 It;s gameday here in Morgantown, it's the start of the 2013 WVU Football season as the West Virginia Mountaineers will be taking on William an Mary at Noon.

The game will be broadcast on FoxSports1, the old speed channel that was converted over to compete with ESPN and their dominance of the market. Which for the Morgantown area Comcast subscribers is Channel 30 on your Television.

As of right now, we still do not know who will be WVU's starting QB, the man taking over for Geno Smith. There are co leaders with Paul Millard and Florida State transfer and Morgantown native Clint Trickett. I've heard rumors of a dual QB system and a third one with Ford Childress waiting in the wings.

The gates are now open and the kickoff is at noon. Not sure of our plans we were talking about going down to Nick and Terri's, but Michelle is suffering from Plantar Fasciitis, which is going to require her to have surgery the day after we get back from vacation. She went to the Doctor yesterday as it was starting to get real bad, to get a shot of cortisone for a little relief, but she was in a whole lot of pain last night. So she will have surgery on one foot the day after we get back from our cruise. This may cause us to stay home to watch the game.

My wonderful niece Amy had a couple tickets to the game, and has given them to Hayley and Jared so that they can go.