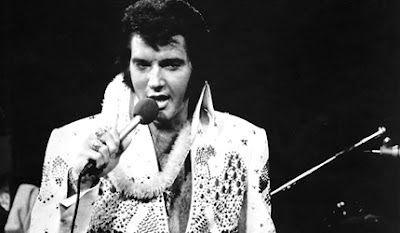 Once a week I like to take a little bit of time out and look through all of my pictures that I have stored on my computer and select just one picture to tell a little story about. I have to be honest, this weeks picture is not my picture and is just simply one I googled off of the internet.

Why did I google a picture of Elvis? Well today is the 35th Anniversary of his death. It was 35 years ago today that I was out in the back yard playing baseball, something I loved to do, and my Grandmother walked outside crying. I had no idea what was wrong, so I asked her. Wiping away her tears and stuttering she said Elvis died.

It had come across the networks as a special announcement that did nothing short of start a media storm of Elvis and his life. I've never seen anything like it before, and never really seen anything like it since with two notable exceptions. When the Iraq War started about 20 years ago and we bombed Baghdad and 9-11-01. Other than those two events I've never seen such a media storm over an event in my life.

I had another picture I was going to use, one of my own, but when I realized this was the 35th anniversary of Elvis's death I decided to change it up a little bit.