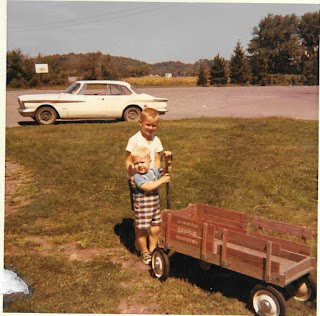 Once a week I like to take a little bit of time out, time to look at some of the 30,000+ photos that I have stored on my computer. Little lost moments in time that I either captured with a lens, scanned, or just stole from someplace on the internet. I like to find just one and post it up and recall or relive the picture to the best of my ability. Sometimes this is a pretty easy task and sometimes it's not that easy, one thing it has always been a whole lot of fun.

This is a long time ago picture, it's when I was probably 7 or 8 years old (yes I was cut then too) with my second cousin Chuckie from Moundsville. Chucky's parents were Rusty and Renee, Rusty being Junaita's (Dad's oldest sister) oldest.

We lived right beside what was then Drummond Chapel Church which is now named Suncrest United Methodist Church, on Van Voorhis. That basketball hoop you see in the background was where I scored my first basket when I was 5 years old. I can remember that basket like it was yesterday, I had to tell everyone I made a basket and I did it without having a pair of PF Flyers, although I did have on Chuck Taylor Converses, but PF Flyers were magical shoes and I didn't have a pair.

I think the car in the background was one of Dad's old beaters.