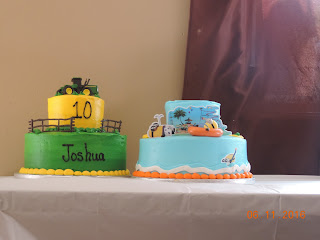 This is rare, I have actually slept in this morning later than I have for sometime. I'm usually up around the 3:00-4:00 hour and I opened my eyes up this morning and saw light outside the window. I'm still the first one up this morning, even the cats are still sleeping. I've got nothing on the boob tube, and I'm trying to get my bearings after sleeping in.

We had a great time yesterday, started off by putting some new flowers on my Dad and Jean's grave. I had also purchased a few solar powered Dragonflies that I also added to the grave. I saw something like that a few weeks ago and wanted to order something similar for them.

After that it was lunch at Whitetail Crossing. This is the first time that I have been there since Ron and Sarabeth have opened the establishment. I kept promising that I was going to go up and try the food. I have to say that they had some really good wings that we had for lunch, but everyone else is telling me to try their ribs as they are out of this site.

After that we had a little family get together for Erica and Josh's Birthday Party at my niece Valaries home. I think the kids made out pretty well and there was even a water battle with the younger kids. My and my siblings did turn back the clock of time a little when Terri threw a hot dog at me, reminiscent of the old family picnics from the 1980's, the only thing missing was the CCR music in the background...lol

Our agendas for the day, grocery shopping. Nothing too exciting as the weather forecast that did look pretty rainy, doesn't look too bad now. We'll have to wait and see.

Have yourselves a great day.
Posted by George Hall at 4:54 AM