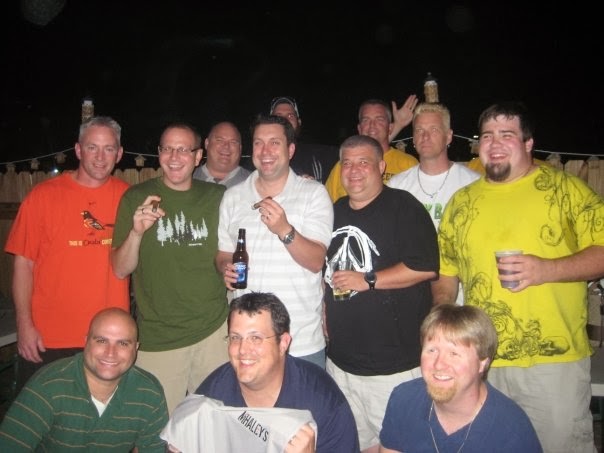 Once a week I like to take a little bit of time out and look through all of the pictures that I have either taken, scanned or stolen from the internet through the years. Little lost moments in time that I like to briefly relive and write a little story about. Sometimes it's pretty easy finding those precious moments, and sometimes it's not that easy. It is however always a whole lot of fun.

This weeks pic goes back to when I last played softball during the summers and the last group of guys that I ever played with. What a great group of guys, guys I used to refer to as the boys of summer, they were your summertime family.

This picture was the MiHaley's team, and we are out on the back deck of MiHaley's drinking a few beers and I think Michael even hooked us up with a TV out there.

I do have to say that this was the time of the year we really started to get organized for the Summer Softball League. I do have to say that I loved the 27 or 28 seasons that I played at BOPARC. Each team and each Summer had their own unique times and experiences. I played on a number of great teams, but never won the post season Championship but I have about a half a dozen or so regular season Championships. They only started to award them in the last 10 years or so, so the great Sterling, Heiskell and King, Judies Lounge, Recourse and MVP teams didn't get a whole lot of love.

I do miss it, but I'll always remember and cherish those summers.