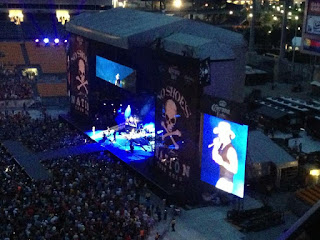 Here I sit once again in a quiet household, being the first sand only one here here who has recovered from a losing battle with the sandman from last night. I'm thinking today might even have a nap associated with it.

We got home a little earlier this morning than we did last week, which was a little bit of s surprise considering the crowd size and the fact that there were four acts performing last night.

We had a great time, we parked at Station Square and rode the Gateway Clipper over and back. We were able to jump on the Parkway pretty easily and we enjoyed a nice, non invasive tailgate.

We missed the first act, and saw most of the Eli Young Band. We were there for the entire Eric Church and Kenny Chesney performances. When Chesney hit the stage it electricity was in the air and they crowd was already pretty pumped up. I think my wife had a great time last night, I think I created a memorable moment for her with this concert.

I did manage to get a few pictures last night from my iPhone and they are all located in my Facebook Album.  I heard a rumor that our traveling gnome was was it last night and was drinking some beer in the Burgh.

Chesney has been in Pittsburgh seven consecutive years, so I asked Michelle situation permitting would she like to see him again next year.

I think we're also going to try to hit a few more concerts at Stage AE next year.

Have a great day,
Posted by George Hall at 6:31 AM