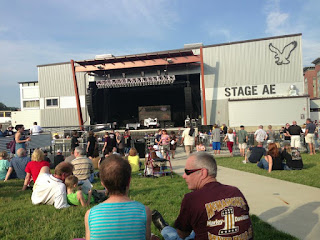 Well concert #1 of 3 is now in the books. Michelle and I went to State AE last night and saw Peter Frampton. It's a nice venue right beside Heinz Field in Pittsburgh.

We were able to get into the venue quickly, the concessions were fairly priced and easily accessible. There were plenty of more than adequate rest room facilities and the arena had a good acoustical setup that enhanced your experience.

As night fell you got a beautiful night view of the City of Pittsburgh.

The night started with the Robert Cray Band who came out and did a 45 minute set while the sun was still up. He kept us all entertained for about 45 minutes or so with some of his hits.

Peter Frampton took the stage about 9:15 an d did not disappoint. He demonstrated why he is one of the true guitar gods with an assortment of some of his work through the years. He was joined on stage by Don Felder, one of the men who made up the Eagles who also rocked the stage. For the encore I had a member of the Eagles and Peter Frampton playing the Beatles While my Guitar Gently Sleeps.

Overall it was a great show and I would definitely do it again. We didn't get back home until after 1:00, so it's been a short night of sleep for me.

Funny story though, we went into Jerome Bettis' bar that was across the street to use the restroom. Strangest restroom I have ever used. Upscale bar, the restroom was rather dark and the Urinals were right in front of a two way mirror. So as you were standing there doing your business you are standing right behind one of the bars looking out over the bar. It was just weird, unique but weird.
Posted by George Hall at 5:16 AM