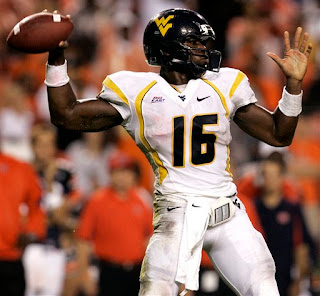 Last night was a tough one to watch as a Mountaineer fan. We went down to Auburn Alabama and in a heavyweight match up came out swinging hard and taking control of the game. We dominated in the statistics and controlled the game all except for a couple KEY statistics. Six turnover lead to 24 Auburn points and WVU's demise in the 30-41 score in the revenge game from last season.


Late in the game Jarrett Brown injured his arm, forcing us to blow a redshirt year from Geno Smith, a true Freshman, late in the game. The only report I have seen on Jarrett's status so far is that he injured his shoulder and should be fine for the next game.

I do have to say that stupid mistakes was our problem. We ran the shuffle pass four times, two times with a little success, the next two times it lead to interceptions by defensive linemen, one to put the icing on the cake as we were trying to win the game.
Posted by George Hall at 6:33 AM