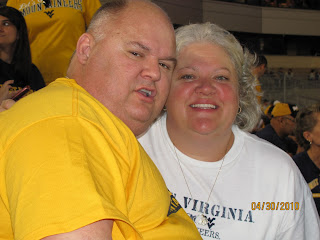 This weeks picture is a pretty special one to Michelle and I. Yes it is coming up on seven years since this fateful day that I made Michelle wait 777 days for. This was the day that I proposed marriage to Michelle and she said yes. It was much earlier in the day that I proposed, as this picture is actually at the WVU Spring Game that year, but it was later that evening. I was going to try to have it put on the big screen at the Stadium, since I knew the operator, but it would have gotten him into trouble and I didn't want to do that, so I did it in the early morning in the back yard.

Later that night after the spring game, we went to a party at Trish's house. She had a bonfire going and had invited a number of people to come over which we did.