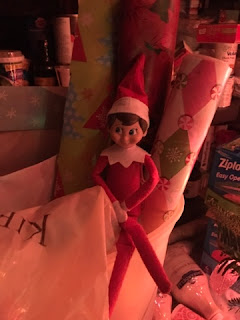 Here I sit on a quiet Saturday Morning, I'm up watching South Park on Comedy Central as I am collecting my thoughts for the day. Hayley and Josh are awake in the bedroom and Sammy is over playing with the Christmas Wrapping Paper.

We'll be doing some final running around today in preparation for Christmas, I was originally planning on working today but they wanted to close out the quarter before then so I have day off. We do have a number of errands to run today, so I'm not upset in the slightest. It's going to be a long day and we have a number of things to do day. We are even picking up the Hot Sausage for Christmas Eve today.

Big day here in Morgantown as WVU basketball Coach Bob Huggins will go for career win number 800 today. This is a remarkable milestone which will just solidify his Hall of Fame application down the road. Go get them Huggs, show them this is your town.

I am happy to report that my 12+ years of boycotting a local radio station because of their syndicated morning show is over with. Since Lex and Terry came on the airwaves and insulted the people of my city, I vowed my radio dial would never return to their station as long as they were broadcasting them. I stood by my boycott and stayed true to it, Kevin was on the morning show from the rival station and it was an easy boycott. As of November 28th they have brought in a morning man named Big Ric and he is actually pretty good and a more than welcome change. I doubt if my boycott hurt anyones bottom dollar, but it was a matter of integrity to me and I fulfilled it. No one will replace Eric and Kevin, but they have now both moved on from Radio and Kevin is completing Law School so it had to end eventually. Not real Happy with how Kevin was let go and less happy with the replacement. Now I have a new option.

Have yourselves a  great day today, it's going to be cold and rainy so keep yourselves warm and dry.
Posted by George Hall at 5:06 AM

Email ThisBlogThis!Share to TwitterShare to FacebookShare to Pinterest
Labels: Sammy, Sammy the Elf on a Shelf