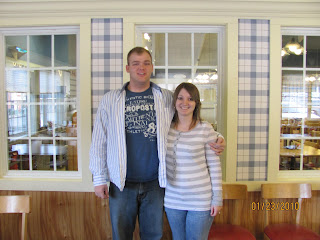 Once a week I like to take a little bit of time out, time to look through my 30,000+ lost moments in time that I have either captured with a lens, scanned or just stolen from some place on the internet. I like to post up one picture and relive it briefly for everyone. Sometimes this is a pretty easy task like today's and sometimes it is a struggle to find that special picture, one this it always is is a whole lot of fun for this writer.

This weeks picture goes back almost seven years, Moke was stationed for a tour of Duty in Iraq and was allowed to come home on leave for a week or so before being re-deployed back to Iraq. Unfortunately this was also a time that Jean's long time live in companion Rich had passed away and it was the time period of the funeral.

Moke and Ang spent a lot of time getting re-acquainted while he was back, they were to tie their marital vow about nine months later in October after Moke had come home for good.

This picture however was taken at the Golden Coral when we all got together to have dinner with Moke so we could all spend a little time with him before he had to go back.