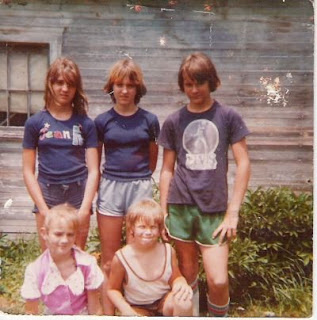 Once a week I like to take a little bit of time out and reflect on all of the digital images that I have stored on my computer and around the net. I like to select just one of those lost moments in time and write a little something about it. Sometimes this is a pretty easy thing to do, and sometimes it's not so easy, it is however always a whole lot of fun.

This weeks photo is one that goes back all the way to the Summer of 1978, back when I was much thinner and actually had follicles growing out from my head. This is the first picture that was ever taken of all of my siblings together at the same time. It was done a second time in 1988 when my sister Pam got married, once again in 1999 when my Father passed away and a final time on Christmas Eve in 2007.

I always tell everyone I used to be tall, skinny and have hair and my brother Gary used to be short, fat and bald (although his hair has grown out in this picture). We just changed places and positions. I'm still the Oldest and he's still the youngest, but I think our attributes of height, hair and girth have switched places.

The picture was taken at my Grandmother's (my as in I lived with her) when we had a summer cookout from yesteryear. I remember that my Dad had a Suzuki 750 at that time, but a friend of his borrowed it and died on it later that summer.

This was the summer after my Grandfather had passed (hence we wearing the Elvis shirt) and Van Voorhis Road was still a two lane road at this time, I have a Geocache hidden close to the location of where this was taken and where My Little Home in West Virginia (name of my Geocache) was played numerous times.