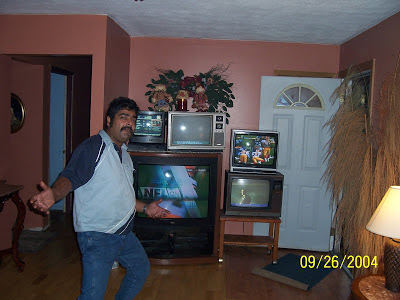 This weeks pic goes back a number of years. It was on a Sunday and it was during the NFL Football season. My Brother in Law Nick is a huge football fan as you can tell. Every Sunday we would set up five televisions in the living room and Nick has five different receivers, all so he could watch five different NFL games at the same time.

If you were a fan of an off market team (other than a Pittsburgh Steeler fan), Nick's setup allowed you to watch your games. Nick was/is a big Carolina Panther fan and I know he used to follow them religiously.

They were some great times, sometimes it would be just Nick watching the games and sometimes all the guys from the neighborhood and a few others would show up.

There was also the time when Nick rented a fog machine for the start of the NFL season, but that's a whole different story.