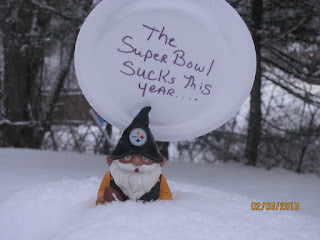 Meet "Sammy the Steeler Gnome". Sammy is our gnome that has been known to sit on our mantle in the living room, but he has a tenancy to roam around a little bit. Sammy tells me that he is going to travel around this year and will have his picture taken in a few different places this year.

Yesterday however Sammy was stuck in a snow storm in my back yard to proclaim his feelings about this years Super Bowl. What choices does he have, does he want the San Francisco 49ers to get their Pittsburgh Steeler record tying sixth Super Bowl trophy or does he want the arch rival Baltimore Ravens and Ray Lewis to get a Super Bowl Championship. Throw in the snowstorm (Sammy hates snow too) and yesterday just was not Sammy's day.

Sammy has told me he wants to see the world this year and would like to travel with me and Michelle wherever we go. I've added the Gnome and Sammy labels to my blog, just click either one of them whenever you see me Sammy and see where he is and has been.

Hope your day is better than Sammy's.
Posted by George Hall at 4:00 AM