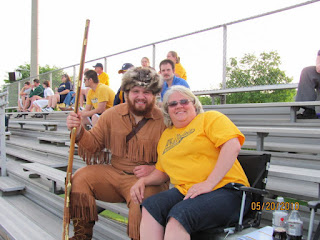 Once a week I like to take a little bit of time out, time to look at some of the 30,000+ photos that I have stored on my computer. Little lost moments in time that I either captured with a lens, scanned, or just stole from someplace on the internet. I like to find just one and post it up and recall or relive the picture to the best of my ability. Sometimes this is a pretty easy task and sometimes it's not that easy, one thing it has always been a whole lot of fun.
This weeks pic goes back a number of years, Michelle and I were at a WVU Baseball game and we got this picture taken with the Mountaineer. Actually, that picture is taken with in my opinion the greatest Mountaineer, Brock Burwell. I knew him prior to him being the Mountaineer and he was the Mountaineer during the Final 4 team, and the Orange Bowl Team. This would I would consider the most successful run by both teams.
Brock had a storied history of being a Mountaineer, his Uncle was Rock Wilson and Brock was the first Little Mountaineer in school history, then grew up and came to school here and followed that little Mountaineer up by serving two years as the Mountaineer. The year before he was the alternate and we gave him all kinds of crap about that, but his time finally came and he set the bar high. There is a picture of a Mountaineer with thick calves standing on top of Spruce Knob, that was Brock in that iconic pic.
Have yourselves a great day.
Hi ho hi ho
Posted by George Hall at 2:00 AM