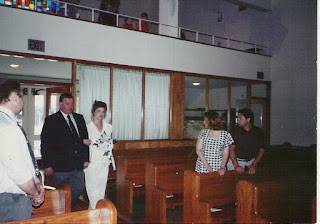 Once a week I like to take a little bit of time out, time to look at some of the 30,000+ photos that I have stored on my computer. Little lost moments in time that I either captured with a lens, scanned, or just stole from someplace on the internet. I like to find just one and post it up and recall or relive the picture to the best of my ability. Sometimes this is a pretty easy task and sometimes it's not that easy, one thing it has always been a whole lot of fun.

This week's pic is from my sister Terri and Nick's wedding some years ago, and I'm thinking they are coming up close to a 30th Anniversary here sometime in the next year or so, that is if my math is correct.

It's a picture of my Dad walking Terri down the Isle, something I will have the honor of doing for Hayley in about a month. I was standing off to the side here, and a funny story about this day. Kim and Ed were up top filming the day's events and I was sitting with my sister Pam for the ceremony. Sometime after this, I was reviewing the tape with Kim and asked the question of who was the bald guy sitting beside Pam. It was an instant realization that that was the first time I had seen my thinning scalp. I knew it was thinning, people told me about it, but until someone films you from above you never really understand. It was a shock to the system, to say the least. Of course, what's Kim's solution, she told me to get spray on hair as she was laughing profusely.