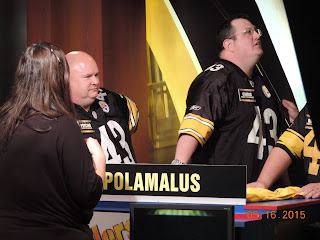 Once a week I like to take a little bit of time out, time to look at some of the 30,000+ photos that I have stored on my computer. Little lost moments in time that I either captured with a lens, scanned, or just stole from someplace on the internet. I like to find just one and post it up and recall or relive the picture to the best of my ability. Sometimes this is a pretty easy task and sometimes it's not that easy, one thing it has always been a whole lot of fun.
This week's pic is from our last KDKA McDonalds Pittsburgh Steelers Trivia Show Championship run. We won the entire tournament three different seasons, we are the only team to win it twice much less three times.
This week's pic was I seem to recall before the shows taping when we were doing the sound-check. Bob Pompeani was screwing with me, they had everyone count to 5 for the soundcheck and he smiled and told me to count to five in Germanbackwards, 2 years of German in High School and four semesters in college, I think he was a little surprised to see that was something that I could do.
Have yourselves a great day.
Hi ho hi ho
Posted by George Hall at 2:00 AM