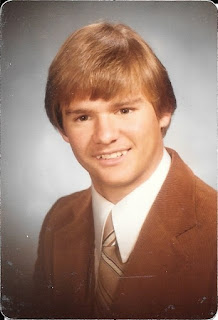 Once a week I like to take a little bit of time out, time to look at some of the 30,000+ photos that I have stored on my computer. Little lost moments in time that I either captured with a lens, scanned, or just stole from someplace on the internet. I like to find just one and post it up and recall or relive the picture to the best of my ability. Sometimes this is a pretty easy task and sometimes it's not that easy, one thing it has always been a whole lot of fun.
This weeks pic goes all the way back to the fall of 1981, I was a Senior in High School and we had our Senior Pictures taken. I graduated in 1982, but the pictures were taken at the start of the school year. All I really remember is that that brown corduroy suite was rather hot. The picture was taken wither during football or wrestling season so it would have been a day where I would have had practice and showered at the school after practice.
Time flies by to say the least, that picture was taken 40 years ago this fall even though it only seems like yesterday.
Have yourselves a great day.
Posted by George Hall at 2:00 AM