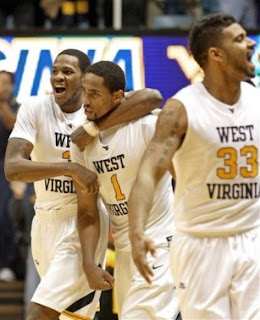 Well we have once again made it to the Sweet 16. We play the Washington Huskies tonight at 7:30 on ESPN for a chance to advance to the Elite 8 on Saturday.

West Virginia will have to play the rest of the 2010 season without starting Point Guard Darryl "Truck" Bryant as he is now out for the rest of the season with a broken foot. I think we will be OK, we still have Joe Mazzulla who was the starter last season before getting hurt. He's had a slow recovery from shoulder surgery and now appears to be 100% over the last 5 or 6 games that we have played.

The Mountaineers will be looking for the school record 30th season victory tonight, surpassing the 1959 NCAA Championship Game team's record of 29-5. We are currently 29-6.

On a special side note the WVU Womens team who also set a school record for wins with a 29-6 final record.

Let's Goooo Mountaineers.
Posted by George Hall at 4:00 AM