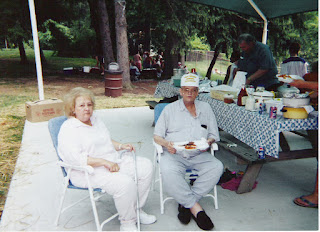 Once a week I like to take a little bit of time out, time to look at some of the 30,000+ photos that I have stored on my computer. Little lost moments in time that I either captured with a lens, scanned, or just stole from someplace on the internet. I like to find just one and post it up and recall or relive the picture to the best of my ability. Sometimes this is a pretty easy task and sometimes it's not that easy, one thing it has always been is a whole lot of fun.
This weeks pic goes back to a time when my Dad was between hospital stays when we had him in ICU for a few weeks and didn't know what his future held him going back in and eventually succumbing in the ICU.
In between those two Hospital stays, we got a reprieve with the man, a chance to get everyone together one more time for one of his cookouts, although I seem to recall my brother-in-law George doing all the cooking. Dad had just purchased his RV and was the only trip that he had ever driven it. Albeit it was from East Gate to Krepps Park, but he did get to use it this one time before he passed.
I do have to say this is almost a little tough of a picture to look at. Jean had just had her debilitating stroke and had pretty much went blind and Dad was swollen and just wasn't the guy we had known. I guess looking back we did have the opportunity to have that one last picnic that he always loved to have before we said our final farewells.
Have yourselves a great day.
Posted by George Hall at 4:00 AM